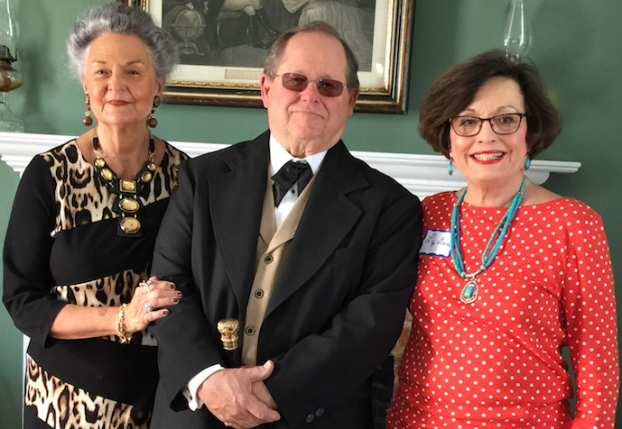 The Meherrin Chapter of the Colonial Dames 17th Century hosted the John Goode Chapter at a joint Colonial Dames meeting April 6. The members met in the second-floor courtroom of Lunenburg County’s 1827 Court House to learn more of the history of the court house and most specifically about the two law offices that sit on the Courthouse Square The earlier of the two was built in 1842; the other, in 1881. Guest speaker for the event was Rear Admiral Stephen S. Israel (ret), president of the Lunenburg County Historical Society and project manager for the Society’s restoration of the law offices. Israel both entertained and also informed the members by portraying his ancestor, Major Henderson Lewis Lee, Civil War survivor and a Commonwealth’s Attorney for Lunenburg County. Following the presentation in the courthouse, the group toured the renovated law offices. Both are decorated in the fashion of the time in which they were built. Pictured are, from left, Meherrin Chapter President Lucy “Cookie” Currin; Israel; and Liz Gielow, president of the John Goode Chapter. (Send a “Pic Me Up” with names and information to PicMeUp@KVDispatch.com.)

Artwork on display at Ripberger Library

Ripberger Library is currently displaying Creative Works of Linda Clark. Clark is a self-taught artist, only beginning to work in... read more