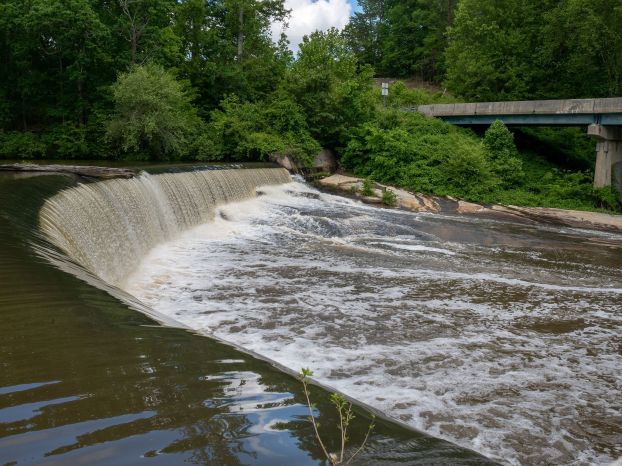 The Town of Victoria’s dam at Nottoway Falls is one of three dams that have not been inspected since before 2015. The town plans to begin the process of inspecting this dam and the ones at Modest Creek and Lunenburg Lake soon. (Photo contributed by Robby Batte)

Town Manager Rodney Newton said during the Tuesday, July 14 town council meeting the town’s dams have been out of compliance since sometime before 2015, according to the minutes from the meeting. The dams are supposed to be inspected once every five years to be permitted by the Virginia Department of Conservation and Recreation. (DCR) The town has dams at Modest Creek, Nottoway Falls and Lunenburg Lake.

The dams have to be inspected by an engineer, an emergency action plan and inundation zone must be documented to show where the water will go if the dam fails. The estimated total cost for inspection of the three dams is $47,000. The minutes said the town does have a grant of $10,938 from the DCR to help offset the cost. If the town has to remap the inundation zone, that will another $54,000 in estimated expenses. A grant of $22,500 from DCR could potentially reduce that cost.

Newton is working with AECOM, one of the world’s premier infrastructure firms in Los Angeles, for proposals on the project.

The council gave Newton permission to move forward with the first phase of dam inspections.