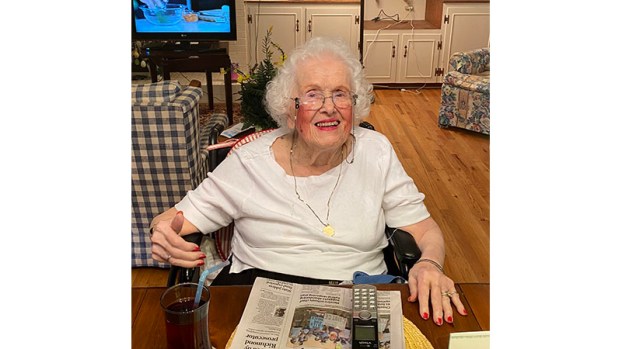 Marjorie Powers recently continued her faithful practice of thanking God for His grace in granting her another year of life. She turned 104 on July 22.

“It feels real good that the Lord has blessed (me) to live this long,” she said.

She stated she is in good health and has completely avoided COVID-19.

The pandemic did impact the way she celebrated her birthday this year, though, limiting the close human contact she could have.

“I asked everybody, due to the coronavirus, to go by and wave at me,” she said. “And I would give them a cake and a napkin, and they did that.”

She said she was given all kinds of food after the celebration.

Some numbers helped highlight the outpouring of love Powers received in commemoration of her latest birthday. She received 97 cards, 16 flower arrangements and about eight boxes of chocolate. All this accompanied a significantly large cake that had the number “104” on it.

For multiple people who asked, she readily shared some of her secrets to living a long life.

“I didn’t smoke, I didn’t drink and I didn’t run around with wild men,” she said.

She is able to enjoy life as a centenarian in familiar surroundings within the Town of Kenbridge, where she has lived for 74 years.

Born in 1916 in Suffolk, Powers attended college at Longwood University, which was then known as the Farmville State Teachers’ College. She graduated in 1935 and taught elsewhere for 10 years before moving to Kenbridge in 1946. She then taught for more than 20 years in town and became the headmistress of a Kenbridge-based private school before retiring in 1970.

When asked what she loves most about living in Kenbridge, her mind instantly went to its people.

“They are such a nice, friendly people,” she said.

“I go to church every Sunday I’m able,” she said.

She took a moment Tuesday, July 28, to share a Bible passage that she has learned through all her years that has helped her in life.

“It is more blessed to give than to receive,” she said, quoting Jesus as He was quoted in Acts 20:35.

Beginning business in a pandemic

For most small businesses, the first year of operation is already packed with trials and tribulations. For a business having... read more