The seniors were to be inducted in April, but due to the pandemic, school was forced to close in March.

Noel Stallard and Shanley Dorin are the NHS Advisors.  KFS Head of School, Lori Bacon, addressed guests and the inductees.  The inductees choose a faculty or staff member to pin them who they feel is a positive role model beyond the classroom.  The following seniors were inducted: 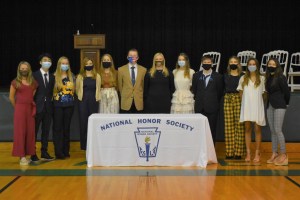