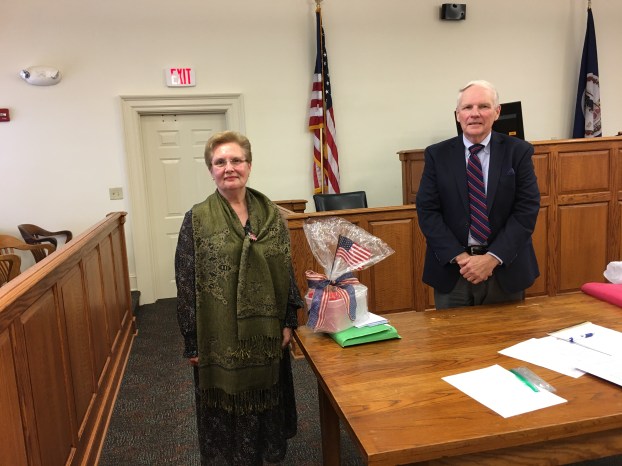 At its meeting on November 14, the William Taylor Chapter of the National Society Daughters of the American Revolution met at Lunenburg County’s historic 1827 courthouse.

Gordon F. Erby, clerk of the circuit court, discussed with the membership the varied responsibilities of the the clerk, who holds an elected position for a term of eight years.

Erby reminded members that the clerk who held the record for the longest tenure (51 years) in this position in Lunenburg was William Taylor, for whom the local DAR chapter was named.  There have only been 17 clerks since Lunenburg County was created in 1746, with the average length of service at 16 years.  Erby has served since 1997.

The clerk’s office is custodian of a variety of legal documents, including land records, wills, marriage and divorce records, and criminal cases. Lunenburg has records that predate the American Revolution, with a number of the older books being restored.   The record-keeping has become more complicated over the years and the volume of paperwork has increased.  Erby displayed examples of old and new filings.

DAR is a non-profit, non-political service organization that promotes historic preservation, education, and patriotism. The William Taylor Chapter has local members throughout Southside Virginia with a large number from Brunswick, Lunenburg, and Mecklenburg Counties.

Comtemplate what makes you truly thankful

A teacher once asked her students: “What are you thankful for on Thanksgiving?” One little guy wrote, “On Thanksgiving, I’m... read more