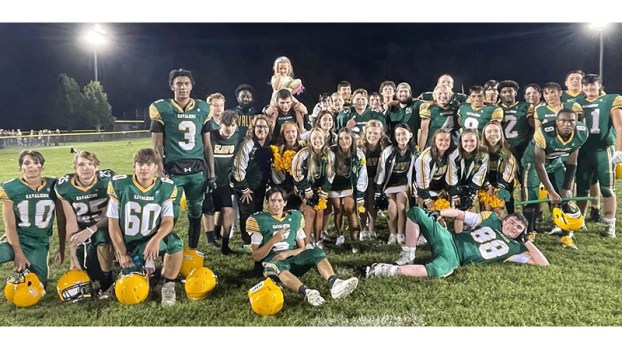 The Kenston Forest Kavaliers football team moved to 5-0 after their victory 50 to 42 over the visiting South Hampton Academy (SHA) Raiders.

The Kavaliers played two games this past week defeating Richmond Christian School (RCS) on Monday, Sept. 20, and winning again on Sept. 24 over SHA.

The Kavs were up 58 to 6 at halftime versus RCS and were led by Senior wide receiver and running back Trey Lewis who had 206 all purpose yards and 4 touchdowns by halftime.

Junior quarterback Tyler Turman was slinging the rock through the air and on his feet and finished with 238 yards passing and 52 yards rushing with two touchdowns.

Defensively the Kavs were stout versus RCS. Seniors Kendall Thorne and Ryan Whitehead led the charge, Whitehead with 18 tackles and Thorne with 16 tackles and a 74-yard interception returned for a touchdown.

The Kavaliers then returned to action three days later to host the South Hampton Academy Raiders for KFS homecoming night.

It was a chilly fall evening, and the Kavaliers came out of the gate slowly. At halftime, the visiting Raiders led 26 to 14. At halftime, the Kavs football staff made adjustments and things changed rapidly in the second half.

The Kav defense brought the heat against South Hampton in the second half, holding them to two scores and racking up sacks and tackles for loss. Senior linebacker and defensive end Ryan Whitehead led the charge with over 28 tackles and two sacks by the end of the game. Turman joined the defensive party as well with 16 tackles and one sack.

In the final 36 seconds of the second half, the Kavaliers had tied it up 42 to 42 and were knocking on the Raider’s door. Turman threw an 18-yard dart to Senior tight end Steve Dormady for the go ahead touchdown, and the Kavs went on to secure the victory 50 to 42.

The Kavaliers return to action this Friday, Oct. 1, at home when they take on arch rival Brunswick Academy at 7 p.m.

Where there was once a grassy open field, there are now five soccer fields. The Lunenburg United Futbol Club hosted... read more