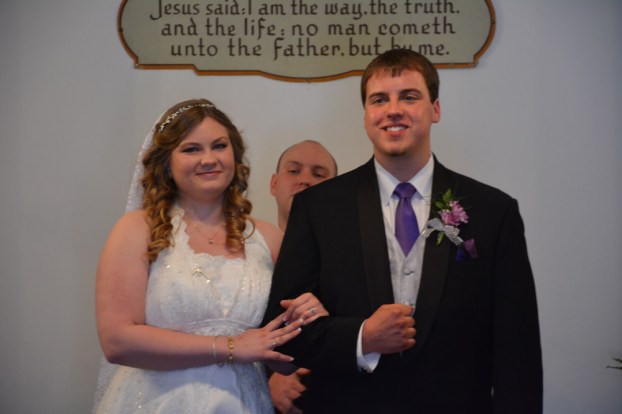 The marriage of Miss Brittany Rosensky of Willamston, SC to Mr. Brent Hood of Lunenburg Va. took place on April 16, 2016 at Northside Gospel Chapel in Victoria Va. Reverend Mo Preston of South Carolina officiated at the double ring ceremony. The bride was given away by both of her grandmothers. The bride wore a lace gown with a bustle-back. The parents of the groom, Mr. and Mrs. Glenn Hood also of Lunenburg gave the rehearsal dinner on April 15, 2016 at Kahills Restaurant in South Hill Va. In the absence of the bride’s parents Bonnie and Frank Rosensky of South Carolina, Glenn and Karen Hood also gave the wedding and hosted the reception at The Lunenburg Golf Club in Victoria Va. Grand Ole’ Opry guests, Joe Mullins and The radio Ramblers played bluegrass music at the reception. Tommy and Tammy Owen of Victoria Va. catered the reception. Tina Nowlin of Lunenburg Va. was responsible for the flowers and the decorations at the reception. Kathy Ashwoth of South Hill and great aunt of the groom gave a bridal shower on April 2, 2016. Jean Harding of Victoria Va. hosted a tea on April 9, 2016 at Victoria Restaurant. On the day of the wedding Judy Norrell of Washington DC and Victoria Va. hosted a brunch for the bridal party at Uptown Coffee Café in Victoria Va. Her friends Sandy Cooke of Matthews County, Regina Rose of Washington DC, Jill Howell of Washington and Phyllis Borzi of Washington DC all helped with the brunch. After a honeymoon in Charleston S.C, the couple will reside in Lunenburg, Va. on the Hood Family Estate.