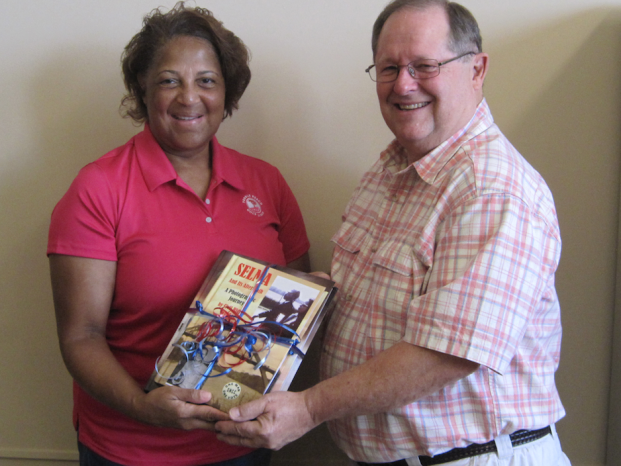 At a recent meeting of the Board of Directors of the Lunenburg County Historical Society, Wanda Gordon Morrison (left), Co-Chairman of the August re-enactment of Lunenburg’s historic Voting Rights March of 1965, presented two books to Society President Steve Israel, (right), mementoes of the walk to be placed in the Society’s archival collection. SELMA: And Its Aftermath by Bill Monnie and The Lake Effect by Terry And Bill Monnie both discuss the Civil Rights Movement of the 1960s in which Monnie was active. Monnie was a civil rights worker in Lunenburg County during the summer of 1965 and helped encourage the voter registration movement that culminated in the march. He returned in August of 2016 to be present at the march re-enactment. Three hundred thirty five marchers took part in the August event, with some eighty people who joined them by bus at the courthouse for the program at which a resolution was read to recognize Mr. Nathaniel Lee Hawthorne, Sr. The Lunenburg County Historical Society made a monetary donation to the event and also supplied water to the marchers at the courthouse.

Bethel Christian Church, in Green Bay, will celebrate homecoming on Sunday at 10:30 a.m. The program will be followed by... read more