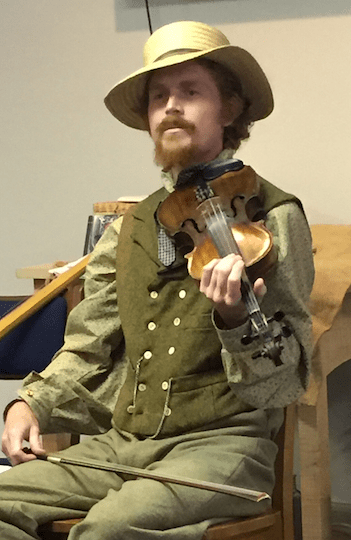 Barry Wheary of Richmond, proficient performer of period music on banjo and fiddle, presented a program that traced the history of the origins of traditional Southern music from the early 19th century in Southside Virginia.

The Lunenburg County Historical Society was fortunate to have Barrow Wheary to present an informative and entertaining program at its June 23 meeting at the Victoria Public Library before a full house of appreciative listeners. His topic was “Sweeney, Knauff and the Virginia Reels: The Birth of Southern Music in Southside Virginia.”

Wheary told of Joel Walker Sweeney from Buckingham County who popularized the banjo. Demonstrating on a traditional banjo which Wheary had made himself, he discussed how Sweeney had learned to play this instrument that originated in Africa from slaves and freedmen. Sweeney’s varied venues, including New York City in the 1830s, helped to spread its popularity beyond the South.

George P. Knauff, an enterprising immigrant from Germany, settled in Farmville. Thanks to Knauff there are early documented fiddle tunes that he transposed for piano. These Virginia reels, many of which are Southside Virginia originals, marked the first glimpse of a distinct regional music in the South.

The video of Wheary’s presentation is on the Lunenburg County Historical Society (LCHS) Facebook page and on YouTube. You do not have to be a member of Facebook to access the LCHS public page. Be sure to scroll all the way down and you will find not only this video but also yet another video of Barrow playing his banjo at Nottoway Falls, a historic site in his own family’s history of Southside Virginia.

Barrow Wheary, was born in Richmond where his still lives and works at Maymont. But if you ask him, he will tell you that his true home is Southside Virginia and especially that land along the banks of the Nottoway River — where his family’s roots run deepest and in whose soil so many generations of his ancestors lie sleeping.

Blowing in the wind

I love talking about nature and all the beautiful things Jesus creates. I’m looking out of my window at the... read more