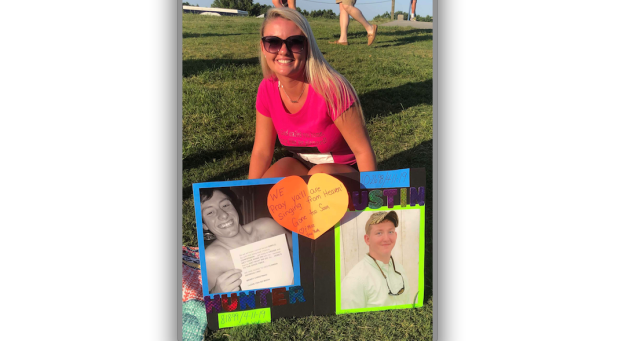 Courtney “CJ” Daniels brought a poster of Hunter McCraw and Austin Daniels. McCraw, her boyfriend, and Austin, her brother, were meant to attend the Florida Georgia Line Concert together before McCraw and Austin’s death in April.

A shout out to CJ took place during the Florida Georgia Line’s recent concert in Virginia Beach.

Austin Daniels, of Lunenburg, and Hunter McCraw, of Nottoway, both died in a vehicle accident on April 11.

Tina Glover Daniels, Austin’s mother, said CJ bought her boyfriend, Hunter, tickets to see Florida Georgia Line before his death. Because the three were inseparable, Austin, CJ’s brother, would also attend the concert. Austin had not yet bought his ticket.

CJ asked if her parents could come with her to the concert. Tina said they agreed. Hunter’s sibling, Kayla, other family members and approximately 10-15 friends attended the concert with them.

Tina said the idea came to her to ask Florida Georgia Line via social media to give a shoutout to CJ, Hunter and Austin.

She created a post on Facebook to Florida Georgia Line describing Hunter and Austin, their death, and CJ’s connection to both of them.

Tina said she came into contact with area entertainer Chris Page in addition to a radio host in Virginia Beach. She was encouraged to make a sign about Hunter and Austin.

Tina was told to be ready if Florida Georgia Line did not end up saying anything. She said she understood if the group could not single out one person because others in the audience could be in similarly difficult situations.

“If nothing happened, I tried,” Tina said. “I wanted to let CJ know this, that I tried.”

As the concert progressed, Tina realized that the duo had not said anything about CJ, Austin or Hunter.

The shout out was near the end of the concert. Tina got the statement on video, which was posted to Facebook and has received, as of Tuesday, approximately 27,000 views.

“We want to celebrate love with CJ Daniels, who lost a brother and a boyfriend in a tragic car accident together,” the country duo said during the concert. “And honestly, it broke our heart. She’s here tonight with 20 of her great friends … We love you and we send you some good vibes. That’s what music is about. I know a lot of you guys have been through some hard times. That’s why we do this, man. This is what this is all about. We hope that this will bring a little bit of life, a little bit of joy, a little happiness in yall’s life. So CJ, wherever you’re at, we love you.”

Tina said they were shocked, and grateful. She wasn’t sure who directly was responsible for relaying the message to Florida Georgia Line, whether it was the Facebook posts or the people she corresponded with before the concert, but she was glad that she and Hunter’s family could experience it.

“That meant a whole, whole lot to us,” Tina said.

The Church and Community Events calendar is published each Wednesday. Items must be submitted by 4:30 p.m. on Monday for... read more