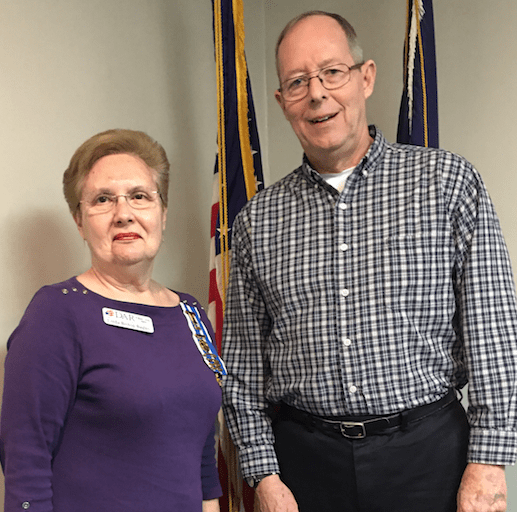 Al Barnes spoke on this topic to the William Taylor DAR Chapter recently. He is shown here with Chapter Regent, Linda Bishop Bagley of Kenbridge.

The William Taylor Chapter of the National Society Daughters of the American Revolution welcomed the return of a favorite presenter, Alexander “Al” F. Barnes, to its March meeting. Barnes, who was born in Niagara Falls, New York, grew up in an Air Force family. His mother was a member of the DAR.

Barnes has a Master of Anthropology degree and has authored seven military history books. His World War I books have told the story of immigrants in the US Army and the close linkage of the Doughboys and baseball.

His most recent book is entitled In a Strange Land: The American Occupation of Germany: 1918-1923.

After Germany’s defeat, its territory was divided into four occupation zones. The troops who were left there were to enforce the armistice until such time as a formal treaty could be drawn up and signed. Barnes used interesting photographs to illustrate the points that he made about the American occupation and even shared a number of artifacts that he had collected from the U.S. occupation of its assigned territory.

The Daughters of the American Revolution is a lineage-based membership service organization for women who are directly descended from a person involved in the United States’ efforts towards independence.

A non-profit group, it promotes historic preservation, education, and patriotism. More than 90 members strong, the William Taylor Chapter serves a wide swath of counties in Southern Virginia, including Brunswick, Lunenburg, Mecklenburg, and Nottoway.

Southern Dominion Health Systems has announced West Pulliam, PA-C has returned to Lunenburg Medical Center as of February, according to... read more