Faced with finding alternative ways to spread the Gospel due to the COVID-19 pandemic, Kenbridge Christian Church and its pastor Rev. Cameron Bailey have expanded the church’s ministry through a drive-in worship services at the Lunenburg Softball Field at 10 a.m. on Sundays as well as online worship services on Facebook Live. Bailey was recently honored for his work in the community by Allen and Allen.

Church in the car

What began as a plan for Kenbridge Christian Church to continue meeting in the midst of a pandemic has turned into a weekly community event that has more than doubled the typical attendance for services at the church and given a glimpse of what church services may look like in the future.

Shortly after the pandemic began, the church led by Rev. Cameron Bailey began holding drive-in services at the Lunenburg Softball fields March 29. With other area churches opting not to have services or not having the ability to have worship online, the drive-in services for Kenbridge Christian quickly took off. 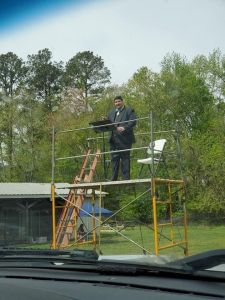 Faced with finding alternative ways to spread the Gospel due to the COVID-19 pandemic, Kenbridge Christian Church and its pastor Rev. Cameron Bailey have expanded the church’s ministry through a drive-in worship services at the Lunenburg Softball Field at 10 a.m. on Sundays as well as online worship services on Facebook Live. Bailey was recently honored for his work in the community by Allen and Allen.

After a first week’s attendance of 130, the numbers skyrocketed reaching a high of more than 400 on Easter Sunday. The church had been averaging around 115 worshippers per week at its physical location, but the change in venue and  a community’s change in circumstances has led to an average attendance of 225 per week. The gatherings are held at 10 a.m. each Sunday morning.

Bailey said some of the people attending the drive-in services were people who didn’t attend church but see the drive-in as a more convenient option.

“Drive-in has opened up the door for the them to feel comfortable,” he said. “They are not bombarded by people who ask them a thousand-and-one questions. They don’t have to worry about sneaking in the back and sneaking in and out early or late. They sit in their car and are content with that.”

Add to the 225 per week in the drive-in service, an average of 259 people who have worshipped by watching the service online and it’s clear the church is reaching many more people after being forced outside its building than it was in traditional worship services before the pandemic. Since Easter, the church has baptized 19 people.

“We try to make sure we do the (online service) every single week for those who might be on vacation that still aren’t comfortable coming out,” Bailey said. “We’re actually seeing a lot of churches that have moved back to indoor services, they’ve got folks still attending drive-in because they don’t feel comfortable yet going back into a building.”

Bailey is not in a rush to get back to worshipping inside the church building.

“Everybody keeps asking, ‘When are you all going to open church back up?’ Church has never closed. We’ve never stopped worship the whole time. We are still going strong,” Bailey said. “So we were not in a hurry to make any decisions to get to this point and we are not in a hurry to rush back. We want to do what is best for the people. We want to be the good needed.”

Bailey said Kenbridge Christian may start going back into its building in the next month or two but that doesn’t mean the drive-in and online services will stop saying there will likely be a lot of people who may not be comfortable returning to indoor worship just yet. He said parishioners do miss interacting with each other but are learning how to fellowship from afar.

“People are still social distancing themselves, but they get out of the cars. They can talk. They wave,” Bailey said. “You definitely sense the, ‘I can’t wait to get back in the building.’”

“This is not what we want but it is what is needed,” Bailey said. “They are accepting of that, and I love it.”

“I don’t think I deserve this award,” Bailey said. “I was just doing what was needed in our community.  God has definitely provided everything we needed to do drive-in right off the bat.”

But the drive-in services were not seen as a good move by some of Bailey’s colleagues. He said he had several friends contact him saying he was being selfish and didn’t care about his people by having worship in a parking lot when they could just have services online.

“I tried to explain to them that we didn’t have a lot of options here. Not everything has internet here,” he said. “The interesting thing is about a month later, those same people were contacting me saying, ‘Can you give you me some information on the drive-in.’”

The service hasn’t always gone according to plan. The church had its biggest challenge Easter Sunday when shortly after the service began, with at least 444 people in attendance, the FM transmitter used to send the audio to car radios suddenly stopped working.

“God gets all the credit for this,” Bailey said. “Everybody said it was a good Plan B. There was no Plan B. We had not planned on this to happen.”

The service was quickly switched to Facebook Live. Those in attendance with phones or laptops began listening to the service through Facebook and turned up the volume so people in cars around them without access could hear.

“It worked out beautifully. It actually got shared and more people we able to able to enjoy it with us,” Bailey said.

Bailey, who has been the pastor at Kenbridge Christian Church for nearly 18 years, said he hopes this time of pandemic and the innovations it has brought to worship will help change traditional church services for the better. He talked about a story in the book of Romans where the Apostle Paul was dealing with an issue in the early church. The traditional Jewish followers were leaving the church while the new Gentile Christians began pouring in with their own ideas about how church should be done.

“I hope that doesn’t happen again. I hope those who have been in church longer, accept and do whatever it takes to reach those who don’t yet know Jesus as their savior,” Bailey said. “We are seeing a lot of doors opening up that had it not been for a pandemic would not have happened. God is definitely opening doors. I just pray we are smart enough to journey through them and not ignore or slam them shut because we are uncomfortable.”

Kenbridge Christian Church has grown significantly during Bailey’s nearly 18 years there. He said the church had 40 attendees per week, most of them elderly when he arrived in August of 2002.

“God has exploded it,” Bailey said explaining how the church grew to an 80 average for worship the first two years and then grew to 100 before arriving at the 115 number brought by the growth of the drive-in and online services.

“It’s been a fun journey,” Bailey said. “I’ve enjoyed the ride that God’s got us on. I look forward to whatever he’s got planned for the future.”

Voters to have say in fate of statue

The Lunenburg County Board of Supervisors will let the voters decide the fate of the Confederate soldier statue on the... read more