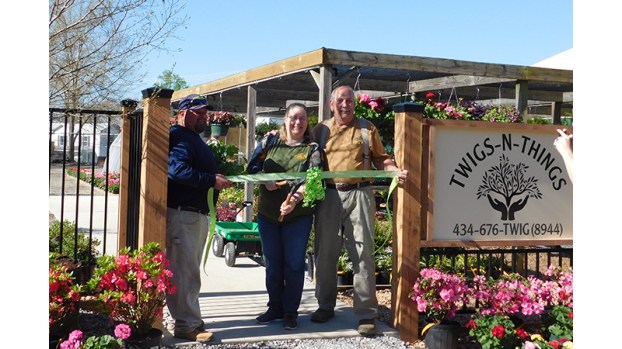 Kenbridge Town Manager Tony Matthews, left, holds the ribbon to celebrate the opening of Twigs-n-Things, a garden center in Kenbridge that opened in early April amidst the pandemic. The business, owned by Pam and Bob Mundhenk, right, has done well as residents have turned to home improvement and landscaping projects during quarantine.

Beginning business in a pandemic

For most small businesses, the first year of operation is already packed with trials and tribulations. For a business having to overcome an economy-slowing pandemic in its first year, the hurdles become even greater.

Metro-Midkiff said the pandemic has been a wild journey for the coffee shop, which went from 12 employees to five after closing for approximately eight weeks March 18.

Metro-Midkiff, who has a degree in business, added the closure did provide some unexpected time to reevaluate operations, helping to allow time for analyzing sales data and doing an overhaul of the shop’s menu. However, Corner Coffee Junction was only in operation for approximately three and a half months before closing, meaning there was only so much data to compare.

She added though the coffee shop has had its own struggles, Metro-Midkiff and her husband were lucky in that they own four established businesses, and as the coffee shop was not their main source of income and not yet viable, there was far less pressure to remain open. Many of the shop’s workers were teenagers preparing to enter college, and the decision to shutdown was easier than for other restaurants where both owners and employees rely on being open to stay afloat.

Reopening the shop and scouring for grants has been a challenge, however. Government funds disappeared quickly to payroll, restocking and other expenses, and employee turnaround became a major issue.

Metro-Midkiff said she was thankful for help provided by the Small Business Development Center at Longwood University, which brought her attention to the Virginia 30-Day Fund, a non-profit providing forgivable loans to Virginia businesses for immediate financial assistance to meet payroll, preserve healthcare coverage for employees and save jobs while they await recently approved federal funding.

“From the minute they approved us, the next day we had funds in our account,” she said.

Corner Coffee Junction has also developed a new partnership with Reid Super Save Market in Dillwyn.

“Our big food suppliers didn’t offer us any breaks on order size or quantities even though they all knew restaurants were struggling,” Metro-Midkiff said. “Most restaurant suppliers require 15-20 case minimums and at least $500-$1000 an order. The case sizes were too big for us to even use up right now.

“So, we got together with Reid Super Save Market, local here in Dillwyn,  to see if they could order some of our essentials for us. It has been such a great partnership that we transferred over a great deal of our orders to them. Working with a small, locally-owned grocery store has offered us flexibility we couldn’t get anywhere else.”

Business, according to Metro-Midkiff, has picked up somewhat since reopening, but sales have not recovered fully. The shop has also changed its hours to 8 a.m. to 2 p.m. Monday through Saturday.

Midkiff was hopeful for the future, but acknowledged most businesses, especially restaurants, fail within the first two years.

For the coffee shop, fighting the battle means surviving both the first year of operations and the pandemic.

Label Shopper in Farmville has been open almost a year now after its grand opening Aug. 18 of 2019.

Manager Jennifer Swett said the business was closed from March 19 to May 15 at the height of the pandemic.

Reopening came with its own complications, particularly with supplies. Swett said the store was closed when spring and summer merchandise would have arrived, so after reopening, the business went straight into receiving fall and winter items, which aren’t a particularly hot item in 90-degree July weather.

Employee turnover was difficult for Label Shopper as well. Some employees did not return to work out of fear of the virus or for personal health reasons. Others, she said, left after refusing to abide by the store’s new mask policy.

She said although the store did well after opening as Christmas approached, all retail stores see a drop in sales after the holidays. Since reopening, sales have still not picked up.

Swett also had worries about the state of public school reopenings in Virginia, adding that back- to-school clothing shopping is probably not on the list when many students aren’t returning in-person.

Twigs-n-Things, a full-service garden center located in Kenbridge and owned by Pam and Bob Mundhenk, had its grand opening April 4 of this year.

Pam said starting up in the middle of a pandemic was frightening.

“But, everything we had done up to that point, we had done on faith,” she added. “So, we kept our faith strong and moved forward with the opening.”

Although the couple did have to scale back some activities planned for their grand opening day, Pam said they kept in touch with Kenbridge Town Manager Tony Matthews and were assured as long as Virginia Governor Ralph Northam’s orders were followed, holding the opening ceremony would be fine.

The Mundhenks did not have to alter the store’s hours due to the pandemic. In fact, opening has gone incredibly well.

Pam said business exploded in April in May, partially due to the Stay-at-Home Order that kept people at home and looking for something to do. She said many turned to gardening and home improvement as a way to keep busy during the shutdown, and several store visitors were first-time gardeners looking to get growing.

She added public response to the new business has been nothing short of amazing.

“During our grand opening, we served over 500 patrons that day and have continued to keep up that kind of pace until the recent heat wave.  It has been just absolutely heart-warming,” she said.  “We love our customers and appreciate their patronage and support.”

Pam added plans for upcoming seasons at the store include the introduction of holiday products and plants, from fall planting seeds, to mums, to, perhaps, pumpkins. The Mundhenks hope to introduce a full line of landscaping products next spring for those who are interested in doing their own landscaping.

She added faith has been a big tool in getting the store where it is so far, and the hope is that the positive response from the community will continue, pandemic or no pandemic.

“We are hoping the trend will continue next year with our first-time gardeners, but not because of the coronavirus.  We pray it will continue because our gardeners enjoyed gardening,” she said.

A requirement to have the Town of Victoria’s three dams inspected will cost the town at least  $50,000 and could... read more