During the week of Sept. 17-23, citizens of the United States are called upon by the National Society Daughters of the American Revolution to familiarize themselves with the U. S.  Constitution. 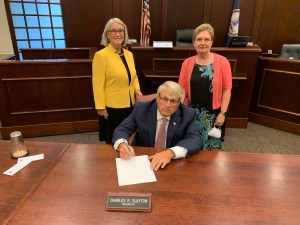 Linda Bagley (right) of Kenbridge, regent of the local William Taylor Chapter of the DAR, and Vice-Regent Betty Winn of Alberta, are shown here with Charles R. Slayton, chairman of the Lunenburg County Board of Supervisors, as he signs a resolution for the celebration of Constitution Week, observed annually to commemorate the signing of the United State Constitution on Sept. 17, 1787.

This national document  sets forth the framework of the government of the United States.  Americans can take pride that theirs is the oldest constitution still in active use in the world today.

The National Society Daughters of the America Revolution is a lineage-based membership service organization for women who are directly descended from a person involved in the United States’ efforts towards independence. A non-profit and non-political group, it promotes historic preservation, education, and patriotism.  Local William Taylor Chapter members reside in many of the counties of Southern Virginia.