The local William Taylor Chapter of the National Society Daughters of the American Revolution has been recognized with a number of awards presented in recognition for  excellence in meeting challenges extended annually to chapters of the organization at both the state and national level.

National awards the chapter has received for the past year include: Chapter Achievement Award – Level 1, Luminary Challenge – 10% or higher membership increase, U.S. flag bookmarks distributed for observance of Constitution Week. 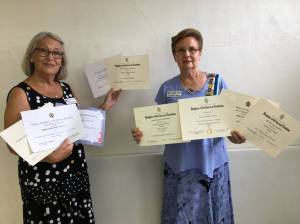 Among the state awards were the following: community classroom support, outstanding support to American Indian schools, support of DAR schools, payment of all dues and obligations by Nov. 15, 2019

As evidenced by the awards and other recognitions that it has received, the William Taylor Chapter has continued to maintain the standards of excellence established by its founders in 1955.  Especially significant is its Level 1 Chapter Achievement Award, which is the highest single award that a chapter can earn.  The chapter is also represented by members on both national and state committees.

Today the majority of the chapter’s active members live in southern Virginia, most especially Brunswick, Lunenburg, Mecklenburg, and Nottoway Counties.  Its members are women who are directly descended from soldiers or others of the Revolutionary period who aided the cause of independence.  DAR is a non-profit, non-political service organization that promotes historic preservation, education, and patriotism.

The DAR has more than 1,000,000 members in the United States and other countries.

Maintaining a good attitude is key to a great life

“Attitude reflects leadership, Captain”  – Julius Campbell. The 2000 hit movie, “Remember the Titans,” has got to be one of... read more