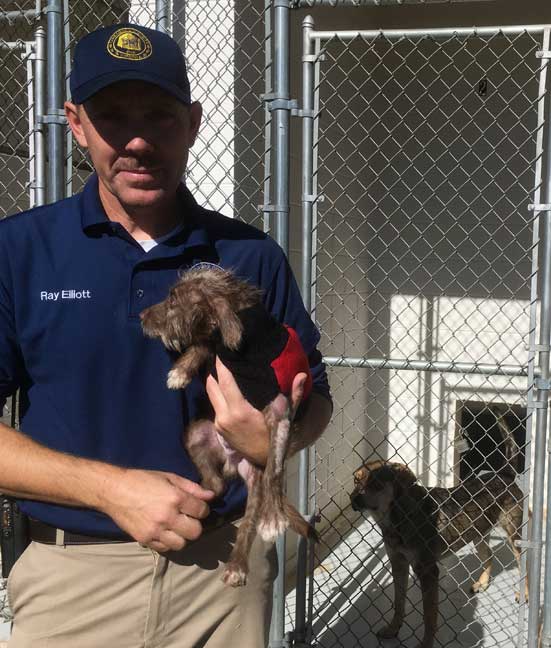 Lunenburg County Animal Control Officer Ray Elliott plans to spend Thanksgiving night inside a kennel at the shelter. His goal is to raise $12,000 to help low-income families with spaying and neutering their pets.

While most of us enjoy Thanksgiving Day with family eating delicious foods, Lunenburg, Animal Control Officer Ray Elliott, will again be Ruff-N-It.

Elliott is hoping to raise $12,000 for the Southside SPCA.

For the past five years, Elliott spends 12 hours in a dog kennel at the Lunenburg County Animal Shelter, all in the name of bringing awareness to the community of the overpopulation of cats and dogs in the county and the need for having animals spayed and neutered.

Elliott will spend Thanksgiving Day in lock up from 6 a.m. to 6 p.m. with no food and only water to drink.

Elliott said the last four years have been very successful in raising awareness and providing funds to help neuter and spay those animals but that the Ruff-N-It Campaign is not about him or what he does.

“I’m just giving a little of my time,” Elliott said. “Twelve hours without any food is not that bad for me, but think about that dog that someone dumped out … he might be able to find him a little water somewhere but not food all the time.”

Elliott said pet overpopulation is a big problem in Lunenburg County, but he has seen a significate drop in the population rate this year, and he is hoping that the Ruff-N-It Campaign continues to drive the pet population down.

In 2019, Elliott said the number-one problem in Lunenburg County was the overpopulation of cats.

“There were over 100 cats and 300 dogs that were released by owners. These cats and dogs have often not been spayed or neutered, and the cycle begins again of homeless animals.” Elliott said.

Donations to the Southside SPCA can be made online via Paypal at http://www.southsidespca.org/get-involved/donate-online, by mail, or stop by the shelter on Thanksgiving Day. Checks should be made payable to Southside SPCA. Mail donations to Ray Elliott, 797 Starlight Lane, Kenbridge, Virginia 23944. Tax receipts are available.