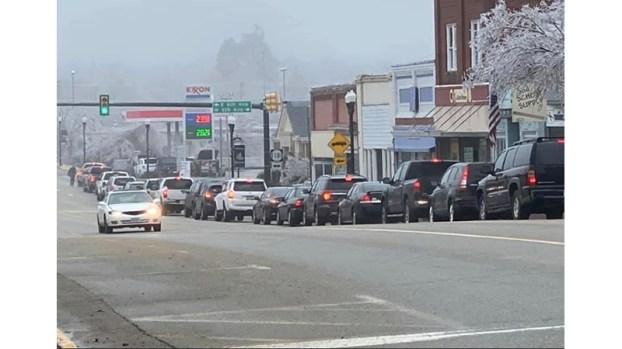 A major ice storm over the weekend froze most of Southside Virginia, including Lunenburg County, leaving an accumulation of ice on trees and downed power lines and more than 5,000 residents without power.

County Administrator Tracy Gee said Monday that county officials have declared a State of Emergency for the county and are utilizing its Emergency Operations Plans to respond. Gee said officials are using a variety of methods to let citizens know the status of emergency responses that have been launched.

Currently a warming and charging station is operating at Lunenburg Middle School from 10 a.m. to 4 p.m. for refilling water containers, warming up, and charging devices.

According to Gee those who may need overnight accommodations should contact the American Red Cross.

Food Lion in Victoria and Shoppers Value in Kenbridge are both open for those who may need supplies.

At 7:40 a.m. Monday, Southside Electric was reporting 40,087 members without power from the ice storm.

Director of Community Relations Lloyd Lenhart said about 70 percent of the system had been affected by the powerful winter storm. “Reports showed 154 broken poles, 125 broken cross arms, and 221 reports of wires down,” Lenhart said.

Mecklenburg Electric crews are continually assessing the widespread damage in their service area and, as of Monday morning, were reporting 80 broken poles with 9,285 members still without power, 306 of those are Lunenburg County residents.

More than 6,000 workers and over 700 bucket trucks are repairing damage and restoring power Monday in Dominion Energy’s service area.

Work at more than 3,500 locations has been completed, with approximately 2,600 projects remaining.

According to a Dominion Energy press release, officials said crews worked through the overnight hours and more than 75% of customers impacted have their lights back on.

“Most customers that are still without power can expect to have their power back on by Tuesday,” officials said.

Ice storm leaves much of Lunenburg without power

The major ice storm moving through the area Saturday, Feb. 13 has left most of Lunenburg County without electricity At... read more