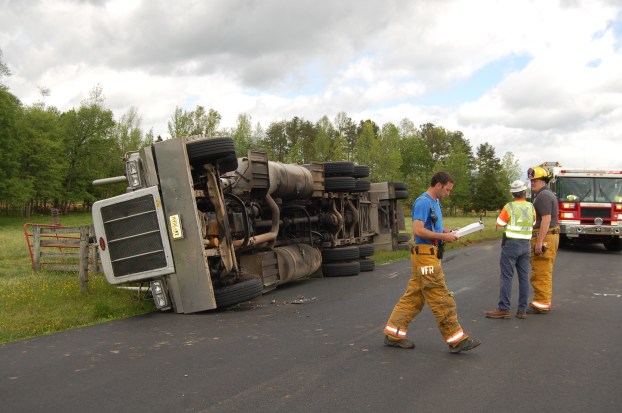 Members of Victoria Fire and Rescue work the scene of an overturned truck Wednesday morning.

A Lunenburg County woman says it is time to get trash trucks off of Oral Oaks Road.

Lauren Tally addressed the Lunenburg Board of Supervisors (BOS) Thursday, Feb. 11, telling the board the road is not wide enough for the trash truck traffic.

“We’ve had three trucks flip in the last year and a half,” Tally said, “We’ve had a resident that had the mirror sideswiped off of her car, and my husband was forced off the road to a complete stop because of these trucks.”

Tally said the road is crowned, so truck drivers are driving in the center because the road is so narrow and there’s no shoulder.

“So, when you encounter these trucks, there’s nowhere to go,” Tally said. “There’s trees and mailboxes and everything. There’s an absolutely no shoulder.”

Tally said she began going to neighbor’s houses to get signatures in support of no trucks on Oral Oak Road when she learned many citizens had encountered numerous problems with the large trash trucks.

“It became quickly apparent that this is not just a couple of isolated incidents,” Tally said. “Everybody that I talked to did encounter a big truck and had been run off the road or had their mirror hit … Get them off of Oral Oaks Road. It’s not equipped for that kind of traffic and those large trucks. Someone’s going to be killed.”

Tally said that lowering the speed limit on the road was not an option.

“There’s no manpower to enforce it,” she said, “They’re not going to do it anyway.”

BOS members thanked Tally for her comments, but did not discuss the issues or have any discussion.

More than 3,000 without power a week after storm

Lunenburg County still has more than 3,005 people without power a full week after a major ice storm tore through... read more