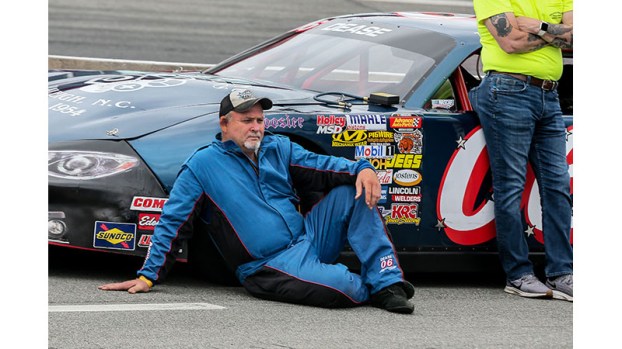 Dease is shooting for the top five in points

The last time Terry Dease raced a full season at any speedway was four years ago.

This season Dease is running the full schedule of NASCAR Advance Auto Parts Weekly Series Late Model Stock Car Division events at South Boston Speedway, and he is having a successful season.

The Oxford, North Carolina resident has posted a top-five finish and four top-10 finishes in his 12 starts this season at “America’s Hometown Track.” That coupled with his overall consistency have him sitting in fifth place in the division point standings heading into the twin 50-lap NASCAR Advance Auto Parts Weekly Series Late Model Stock Car Division races that will headline the Davenport Energy Night event at “America’s Hometown Track” Saturday, August 7.

“We’re going to make a good end-of-the-season out of it,” Dease remarked when asked how he feels about his prospects of finishing in the top five of the track point standings at the end of the season.

“Our goal coming into the season was to finish in the top-eight or top 10 each race and we’ve pretty much done that when we haven’t been involved in wrecks. At the end of the year if we’re in the top five (in points), it would be good. We’re there right now, and we’re trying to stay there.”

On one hand, Dease says he is a little surprised to be in the top five in the South Boston Speedway point standings. Then again, he is not surprised.

“Being an ‘old school’ team, yes, I’m a little surprised,” Dease said. “I’m going to quote Mike Looney – ‘I’m an outdoor behind-the-garage, behind-the-house kind of guy.’ We don’t have the resources for a pull-down rig. We don’t have a surface plate. The way the technology is now we are a little behind on the technology. We’re inching up on it. I’ve got guys behind me saying we’re going to get to the technology, that it’s just going to take a little time.”

On the other hand, with his 35 years of racing experience, Dease is not surprised to be in the thick of the chase for a top-five finish in the track point standings.

“We’ve done this a long time,” Dease pointed out. “It’s all about consistency, and we’ve been pretty consistent when we haven’t been caught up in wrecks.”

A factor that has helped Dease in the track point standings is that he has been able to accumulate a good number of passing points.

“I’ve gained a lot of passing points because I’ve passed a lot of cars this season,” he explained.
“I just cannot qualify well. I don’t know what it is. I can see the leaders but it’s so hard to get up there to them because I qualify so badly. We’re going to keep working on it. We’re going to figure it out.”

With more than a decade of experience in college athletics, including time in the dugout as both a head softball... read more