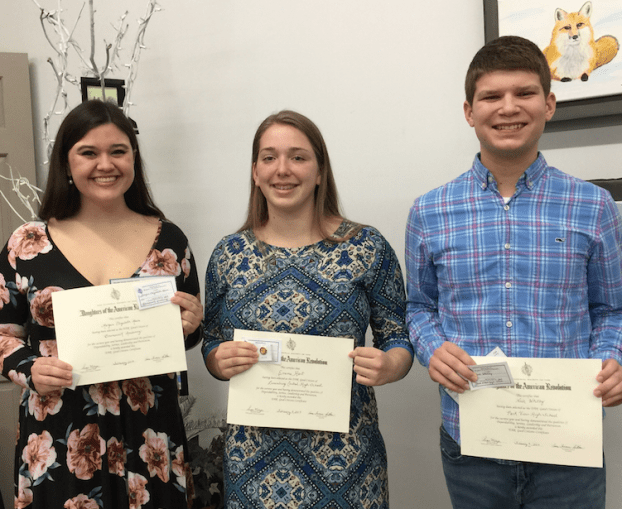 The DAR Good Citizens Award, created by the National Society Daughters of the American Revolution (DAR) in 1934, is intended to encourage and reward the qualities of good citizenship. This award recognizes and rewards individuals who possess the qualities of dependability, service, leadership and patriotism in their homes, schools and communities. The high school seniors who are named for this distinguished award are selected within their schools because they demonstrate these qualities to an outstanding degree.

The following students have been chosen for this recognition during the 2018-2019 school year:

Emma Hart, daughter of Schale and Timmy Hart, is this year’s “DAR Good Citizen” at Central High School of Lunenburg. Emma attends Governor’s School at the John H. Daniel Campus of Southside Virginia Community College. A student athlete, she is captain of the varsity volleyball team and plays varsity softball. In addition, she is a member of both the varsity and competitive cheerleading squads. She is president of the National Honor Society and has represented the school at Model General Assembly. Emma interned at the Goddard Flight Center in 2018. She plans to get a degree in engineering and pursue a career as a mechanical engineer.

Morgan Elizabeth Moore, whose parents are Calvin and Susan Moore, is Brunswick Academy’s “DAR Good Citizen.” Morgan has played junior varsity and varsity volleyball and honored with the Sportsmanship Award in 2018.

Noah Whitby the son of Kevin Whitby, has been named DAR Good Citizen at Park View High School. He attends the Governor’s School of Southside Virginia and is a member of the Beta Club Honors Society, the Key Club, and the Spanish Club in his high school.

The William Taylor Chapter of NSDAR salutes all of these fine young people in its membership area who have been selected for their good citizenship.

The Church and Community Events calendar is published each Wednesday. Items must be submitted by 4:30 p.m. on Monday for... read more