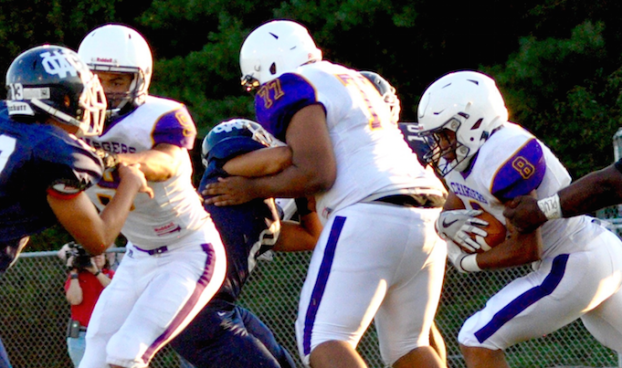 Central High School’s varsity football team had an opportunity to tie or take the lead late in its contest Friday night against host William Campbell High School, but the Chargers fumbled the ball, allowing the Generals to later score, sealing a 34-20 victory.

“It was a tough loss for us,” Central Head Coach Will Thomas said, though he noted his squad showed improvement following its 28-8 season-opening home loss to Altavista Combined School the week prior. “We played a little bit better. We had our chances, had a fumble at the end of the game. We were driving, it was 27-20, and we fumble, and it kind of hurt our chance.”

Despite the loss, it was clear to Thomas that the Chargers’ offense showed growth.

“We moved the ball,” he said. “A couple times we didn’t take advantage of … we drove a ball deep and couldn’t punch it in. We had a few fumbles.”

One came on a 4th-and-1 play in which Central had gained the necessary yardage for the first down.

There were several individual standouts that the coach highlighted.

Carter, a sophomore running back, led the team with 104 yards and two touchdowns on eight carries. He also had 28 yards receiving.

Carter is an emerging standout who is new to the team, and Thomas added that Carter brings some speed that Central has not had in a while. The coach also said that Carter is one of the team’s better tacklers.

As a cornerback on Friday, Carter had three total tackles, including one solo tackle.

“Our run defense was pretty solid all night,” Thomas said. “We got some pressure on the quarterback. He’s a good quarterback, so we had our work cut out for us. He’s got some good receivers too.”

Thomas also offered praise for senior linebacker Khalil Wood’s defensive effort, which included four tackles, including one solo and one for a loss.

Thomas described the Barons as “extremely athletic — we’re going to have our work cut out for us again this week. (There are) a lot of athletes on the team, and they have a lot of guys from last year who played last year …”

He said the Barons will come after opposing teams on defense, are big up front on the offensive line, and they feature a quick quarterback and good receivers.

In its only game this season, Bluestone fell 14-0 to visiting John Marshall High School on Aug. 30.

In terms of his team’s health, Thomas said the Chargers are a little banged up, “but I think we’ll be alright.”

As of Tuesday morning, he did not expect any starters to be sidelined.