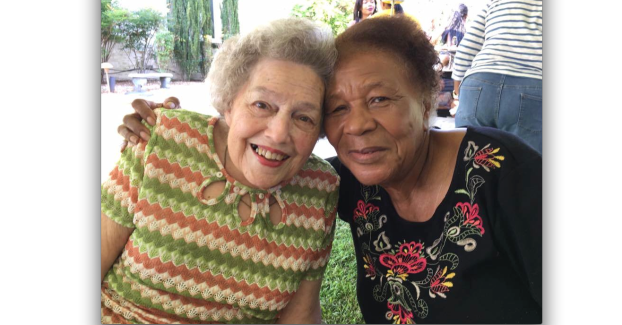 On May 15, the “twin sisters” will celebrate a milestone birthday, turning 90 years old.

Margaret Walker Dilworth and Annie Ruth Kirk Clarke were born during the Great Depression and during a different time in the history of the United States.

Dilworth tells the story that they were born twins, but since they were of different races, she was given to a black family to raise and Clarke was raised by a white family. She laughs as she tells how they reunited while attending Brunswick High School basketball games during the years of Bryant Stith’s coaching career. Stith is married to the former Barbara Dilworth, daughter of Margaret.

Stith, who played in the NBA for 10 years, calls the ladies “twin grandmas.”

At the games, the ladies had special seating, first bench behind the scorer’s table. No one dared take those seats as overseen by then high school principal Mark Harrison. His endearing term for the ladies was “brown sugar and white sugar.”

The two, some of the oldest fans, saw Brunswick through back-to-back-to-back state championships in basketball.

Clarke was born at home near Dundas in Lunenburg County to Hinda and Luther Kirk. Her sister, Virginia Kirk, was celebrating her fourth birthday on May 15 when sister Annie Ruth arrived. As the story goes, Virginia wanted strawberry shortcake, not a sister.

Growing up on a tobacco farm during the depression, she received a driver’s license at age 14 and graduated valedictorian of Kenbridge High School after 11 grades. She moved to Lawrenceville to work for the Brunswick Health Department, met Lloyd Clarke who ran Clarke’s Department Store with his family and they married and ran the store together until his death. They are parents to three children.

Dilworth was born at home in Petersburg, to Corrine and James Edward Walker as the oldest of three. She graduated from Peabody High School and was given the opportunity to study to become a licensed practical nurse at the South Hill Hospital where she was one of three blacks in the program. She served the Commonwealth of Virginia for 25 years at Central State Hospital in Petersburg. She had nine children, a daughter raised by her aunt, and later seven boys and a girl with her husband Robert “Bob” Dilworth who she married in 1950.

This year, the twins will not be able to physically get together due to the COVID-19 pandemic. In year’s past, there have been some great celebrations including an elaborate dinner at Mrs. Dilworth’s house given by her children. One year, the ladies celebrated a night out for dinner at Nottoway Restaurant. All those dining that night sang “Happy Birthday.”

Clarke is currently living at The Envoy of Lawrenceville. Visitors are prohibited due the COVID-19 virus. She spends time at her home in Lawrenceville or in Norfolk with her daughter.

Since connecting at the basketball games and realizing the common birthday, the ladies spent much time together, on the telephone or visiting. Mrs. Dilworth makes a mean sweet potato pie and often brought one over to her twin. She has continued to visit at the nursing home when able also.

The beauty of their friendship is evident if you see them together or in the photos that have been taken over the years, they are such friends and share so much love. It shows when they are together.