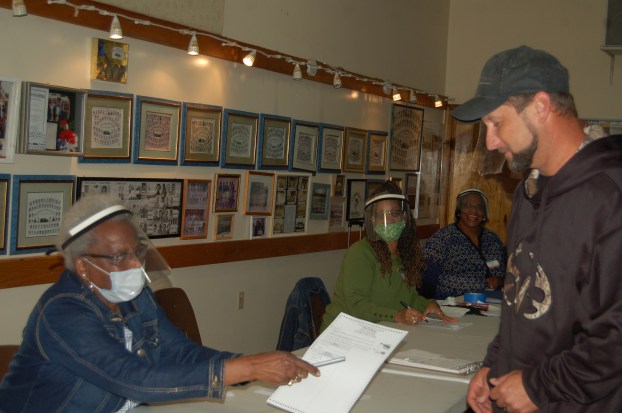 Jason Duffey was one of around 100 voters who came to the People’s Community Center in Victoria to cast a ballot in Tuesday’s municipal elections.

Kenbridge and Victoria each elected new mayors and voted all incumbents who were running back into office during the delayed municipal elections Tuesday, May 19.

Kenbridge elected Vice Mayor Ken Blackburn to the mayor’s position as he ran unopposed for the seat vacated by Mayor Emory Hodges, who did not seek reelection. Blackburn had 70 votes compared to only two write-in ballots.

With Blackburn moving to the mayor’s position, his spot on the Kenbridge Town Council will be filled by newcomer Paul Perusse. Perusse finished second among three unopposed candidates running for three spots on the council, as he garnered 49 votes. Incumbent Wanda Morrison led the field with 67 votes. Raymond Hite Jr., also an incumbent, had 48 votes. They were the only three candidates for the three open positions on the council.

In the town council race in Victoria, four candidates were running for three seats. The voters went with the incumbents, voting in Christopher Gill, Ronald Mattox and Sandra Jones for another term on the council.

Gill was the top vote getter with 145 votes. Mattox was only one vote behind with 144 votes. Jones finished third with 128 votes. Challenger Jeramiah Fix was fourth with 102 votes. There were three write-ins.

From campaigning to working the polls, the pall of the COVID-19 pandemic hung over the election since the virus began taking lives of Americans in mid-March.

The election that looked like it would almost certainly be held in November was moved back to May but postponed by two weeks after the Virginia Senate refused to take up Gov. Ralph Northam’s attempt to remove the municipal election from the window of Virginia’s Stay-at-Home order due to the COVID-19 pandemic.

Poll workers and voters wore masks and face shields to protect each other from the virus while maintaining social distance inside the polling locations.

Absentee voting was encouraged, and it seems many voters went that route. In Kenbridge, 27 voters cast an absentee ballot for mayor, while 45 people voted for mayor at the polls. In Victoria, 84 voters sent in absentee ballots in the mayor’s race, with 99 voters casting their ballots Tuesday. 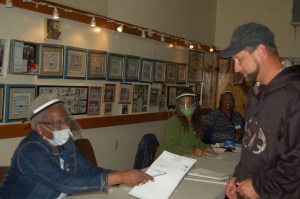 Jason Duffey was one of around 100 voters who came to the People’s Community Center in Victoria to cast a ballot in Tuesday’s municipal elections.

A truck driver making a delivery turned into an opportunity for some impromptu tree trimming Thursday as the top of... read more