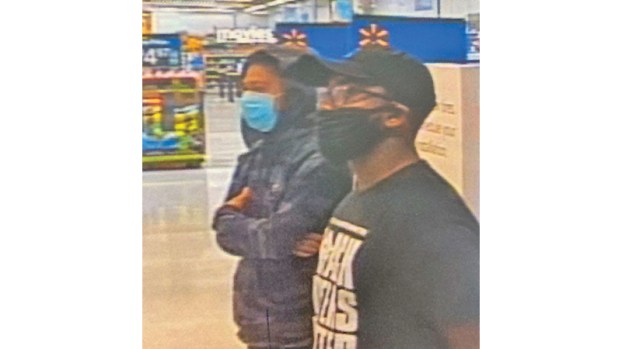 The Appomattox County Sheriff’s Office is seeking the identity of the person wearing the blue surgical mask in this picture taken Wednesday afternoon, Oct. 21, at the Walmart in Madison Heights. The man on the right has been identified as Mik’Tavis Elonta N. Green, of Prospect, who has been charged with first-degree murder and was still at large as of Friday, Nov. 6. A vehicle Green may have been traveling in was found in Lunenburg County on Oct. 28. (Photo courtesy of Appomattox County Sheriff’s Office)

Lunenburg County has become connected to a murder investigation after reports have indicated a car with ties to the case was found unoccupied in the county Wednesday, Oct. 28.

A WSET ABC 13 News report stated the Appomattox County Sheriff’s Office (ACSO) has made two arrests and three charges of first-degree murder in connection with the human remains found inside a burned vehicle Wednesday, Oct. 21, in Appomattox County. 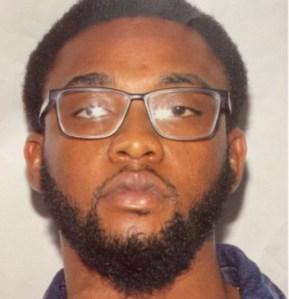 The sheriff’s office confirmed Oct. 28 the human remains belonged to Carlos Levell Rose, 45, to whom the burned vehicle was registered, the WSET report stated. On Oct. 24, deputies confirmed Rose died of gunshot wounds.

The report also noted the sheriff’s office has charged 21-year-old Mik’Tavis Elonta N. Green, of Prospect, with first-degree murder of Rose. Of the three suspects facing this charge, Green was the only one still at large as of Friday, Nov. 6.

The Times Virginian reported Oct. 27 that the ACSO was seeking the public’s assistance in identifying a man wearing the dark hat with the cartoon character. The report stated the individual may have been traveling in a dark-colored 2012 VW Passat, Virginia License UUJ-2916.

The WSET report, posted Oct. 30, stated the 2012 VW Passat was recovered unoccupied in a rural field in Lunenburg County on Oct. 28.