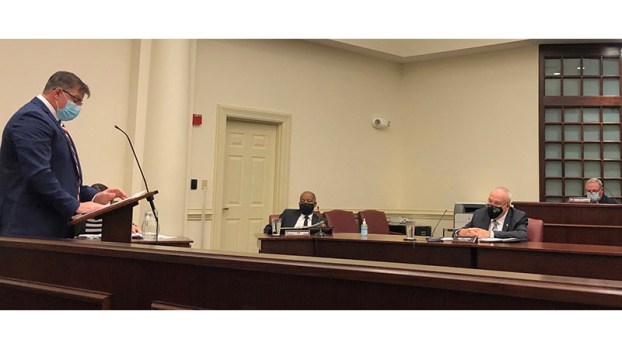 Assistant Superintendent for Finance and Operations James Abernathy with Lunenburg County Public Schools, left, addressed the board of supervisors during the Thursday, Jan. 14 meeting.

After five months of back-and-forth discussions between the Lunenburg County Board of Supervisors (BOS) and school administration regarding having a representative from the school board present at each meeting, the faceoff has ended.

BOS members welcomed Abernathy with applause and said they were happy to have a representative back at meetings.

“We are so glad to see you here tonight,” Supervisors Mike Hankins said. “It helps improve communications … and I hope it continues.”

Supervisor Alvester Edmonds told Abernathy that if anytime he felt that there might be a problem with the board to feel free to “come talk to us.”

During the Dec. 10 meeting of the BOS, Chairman Randy Slayton said he and Vice Chairman Bacon had met with school administration representatives to discuss the issue.

“The school board wants to have a virtual zoom meeting and said they would not be coming back until after this COVID slacked up,” Slayton said.

“They were upset with what I call touchy-feely stuff,” Bacon said. “Bottom line is they are not going to be coming to the meetings.”

During the Jan.14 meeting, there was no mention of what transpired between the two boards to have a school representative once again attend the meetings.

An email to Supervisor Wayne Hoover, who has been outspoken over the past few months in his desire to have a school representative at the meetings, went unanswered about how the decision came about.

An email to Abernathy on the subject also went unanswered.

County Administrator Tracy Gee did respond about how the change came about.

“Mr. Abernathy’s attendance was due to the mutual desire of administrative staff to maintain open communication regarding finance and its effect on school operations,” Gee said. “Both boards support the meeting participation. As you heard last night, the Board of Supervisors is glad to have LCPS represented at the meetings.”

The issue began in September when school officials said the lack of mask-wearing and unsolicited comments from the public were keeping them from attending monthly BOS meetings.

At the December BOS meeting, a new public comment period was enacted for citizens to assist the BOS in adhering to public meeting requirements and allowing citizen participation and maintaining order within the adopted agenda at meetings.

Following that meeting, Gee did not clarify if this new policy was enacted due to the ongoing school board/BOS debate.